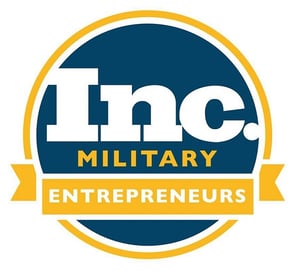 Inc. shows their support for military families through the Inc. Military Entrepreneur program, a program run by their columnist and veteran Norm Brodsky and his wife Elaine, both of whom also own successful businesses. The program sponsors veteran and military spouse-owned companies to attend their events alongside the CEOs of highly successful companies. As part of each conference, CEOs volunteer to mentor veterans and spouses, providing priceless advice to young companies.

The support for military families could not come at a better time.

We've covered the impact of sequestration on military families a lot over the last couple of years. From the job insecurity created by Reduction in Force boards to the real estate insecurity created by BRAC proposals, sequestration has hit military families hard. When you have a mortgage (or two) to cover and see tangible threats to the financial security of your family, you have one of two options that you can take:

If you picked option two, then you're in good company. Military families from Kadena to Ramstein are finding ways to supplement their family's income with second jobs, employment for the spouse, or by starting a business.

These options come with their own set of problems, though. Second jobs are tough for service members; they have long and often unpredictable schedules, and most employers don't really appreciate playing second fiddle to the military. It's also no secret that military spouses are vastly underemployed, which means that they either cannot find enough work or they work in positions below their level of qualification. Business ownership, however, addresses both of those issues: It allows service members to create their own schedules and allows spouses to use their expertise.

Just because starting a business addresses military families’ needs for flexible employment and additional income doesn't mean that it's the best option for every family. Starting a business is tough and, in the words of speaker and author Dr. Marshall Goldsmith, entrepreneurs can expect a guaranteed annual income of zero. Success, he explained, requires daily accountability and a dedication to a plan that overpowers the many distractions and excuses that keep us from achieving our dreams.

Inc., however, has shown that it believes military families can overcome the challenges of entrepreneurship. And really, who better to serve again in positions that require creative problem solving, resilience, and dedication than military families?

Below you'll find a short synopsis of several of the Inc. Military Entrepreneurs along with their Twitter handles, but if you want to read more about them at the conference, check out #incvets and #growco15 on Twitter!

Army Veteran Tim Smith and his wife created a commercial cleaning company in Missouri with an aim to provide employment to fellow veterans and spouses. Smith wanted in particular to help transitioning and retired veterans "feel like part of a team again."

Get more career resources for veterans and military spouses!