We’ve talked about the tax deductions you’re entitled to as a work from home military spouse in our post Understanding Tax Laws for At-Home Workers. But we didn’t go in-depth discussing how to comply with state tax laws as military spouses.

If you're part of the growing number of people in telecommuting jobs, it's time to learn more! 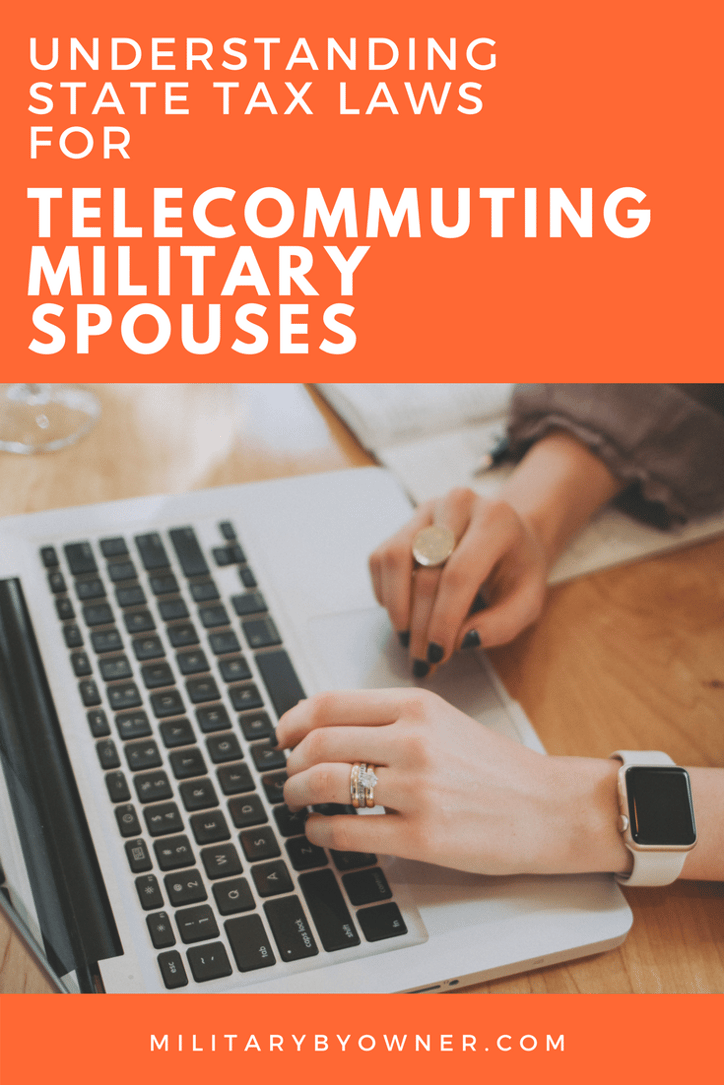 The MSRRA, if you don’t already know, is the act that provides state tax relief for military spouses. To qualify, you have to meet these three criteria.

Complicated? Not at all, but the third criteria can make it difficult to qualify. A domicile is defined as the place you plan to return to. It’s where you have cars registered, the state your driver’s license was issued, the place you own property, and are registered to vote. There are a lot of military couples who don’t share the same state of legal residency.

For example, let’s say the service member grew up in Oklahoma and their spouse in California. But after they met, they immediately PCS’d to Virginia. They’ve never lived as a couple in either of their states of legal residency. In this situation, the military spouse wouldn’t qualify under the MSRAA.

After you determine if you fall under the MSRRA, it’s easy to follow. If you maintain a traditional job in the state where your service member is stationed or are self-employed, you simply talk with your employer who should then pull state tax for your home state. Easy, right?

But we’re talking about the nontraditional job, telecommuting. Let’s say you qualify under the MSRRA and you telecommute. As you review your taxes for the year, you’ll see that the MSRRA and the telecommuting tax laws contradict one another, and you may wonder which you’re required to follow.

Do you file state taxes in your employer’s state? Do you file in your residency state? Or do you file taxes in the state you currently live and where you physically do the work?

There’s no black and white answer. However, Managing Partner of Online Taxman, Vincenzo Villamena CPA, shares that. “Most states provide that state tax is applicable in the state where the services are performed. A minority of states will also assess tax if the employer is located in that state, unless the work is performed elsewhere by necessity.”

In the past, this policy raised concerns that telecommuters would fall victim to double taxation. But Vincenzo put that fear to rest when he said, “Taxes paid on income in one state would be used to give a tax credit on taxes paid on the same income in another state.”

To best determine how you should file your state taxes this year, Anna Blanch Rabe, military spouse and owner of Anna Blanch Rabe & Associates advises you follow these four steps:

Depending on your answers to the four steps, you’ll need to communicate with your employer. While they should be withholding state income tax based on the state in which you reside, some employers will instead withhold for the state where they are located. This usually means that a telecommuting employee will need to apply for a state income refund from the employer’s state, while filing in the state of your legal residence (if under the MSRRA) or the state in which you currently live (if not under the MSRRA).

Anna advises that it’s best to figure this out with Payroll and Human Resources as early as possible so you can limit the amount of unnecessary tax paperwork and maximize your take-home pay.

If you still have questions or concerns regarding your state tax laws, seek guidance from a professional. Since there’s no all-inclusive answer for telecommuting military spouses, it’s best to get individual advice. This post is not intended to be legal advice.

Photo by Christin Hume on Unsplash