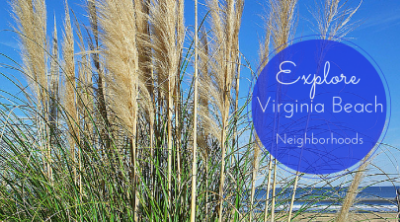 Due to the fact that Virginia Beach is the most densely populated city in Virginia and that the city limits are vast and cover many miles, there are numerous options available to consider for your PCS within the Virginia Beach city limits. When looking for military homes for rent in Virginia Beach, I also researched information on Military Town Advisor. The following listed areas seemed to be the most popular if moving to this region. Remember to be sure to examine the dependence on the tunnel system and tolls for each of the following:

Oceanfront: As its name implies, the Atlantic Ocean provides the typical beach vacation experience, complete with lots of overpriced tourist activities and a boardwalk. The area near 32nd street has boutiques and restaurants worth checking out. NAS Oceana and Dam Neck Base offer the shortest commutes at five to ten minutes.

Chesapeake Bay Area near Little Creek: This area seems to have it all: easy access to calm bay water, plenty of residential access to the beach, and dining options favored by locals. Great schools and location tend to push housing prices higher. Little Creek Base has the shortest commute from this area at ten minutes.

Town Center Area: Also referred to as the downtown of Virginia Beach, it's convenient and centrally located. While on the smaller side, the Pembroke Mall and its surroundings provide all of the commercial entities families need, such as Target and Old Navy and family oriented restaurants. Again, those headed to Little Creek Base have the shortest commute at ten to fifteen minutes.

NAS Oceana Area: More specifically, south of NAS Oceana is very popular with military families. Older homes combined with newer planned communities make up this suburban part of the Virginia Beach vicinity. Red Wing Park is a community favorite to run and play. As you can guess, NAS Oceana and Dam Neck are about a five to ten minute drive.

Courthouse/Amphitheater Area: As recent as the last three years, this area has experienced rapid growth including housing developments and shopping centers. A few reasons for the growth include the proximity to the new Princess Anne Hospital and the central location for commuting to multiple military sites. Norfolk Naval Station, Little Creek, NAS Oceana/Dam Neck and Portsmouth Naval Hospital are all within a 20 to 30 minute commute.

South Indian Road River Area: This area is growing despite some of the inhibited access to highways. Over the past two to three years new planned communities have been built amongst farmland that is being changed to new construction homes. Norfolk Naval Station, Little Creek, NAS Oceana/Dam Neck and Portsmouth Naval Hospital are all within a 20 to 30 minute commute.

Kempsville:  Military Town Advisor suggests if your military member base hops, this may be the town for you because of its central location. Kempsville is made up of many newly constructed neighborhoods and planned communities at more reasonable prices. This area seems to be more utilitarian with plenty of strip mall shopping and dining, but little charm. Little Creek, NAS Oceana/Dam Neck and Portsmouth Naval Hospital have the shortest commute times at 20 to 25 minutes.

Neighborhood reviews contributed by current and former military families are important. Please consider adding your experience from the areas you have lived. These reviews might make the overwhelming task of moving a little easier for a family unfamiliar with the area, or arriving from a distant duty station.

4 Benefits of an Off-Season PCS Move
5 Things to Love About Being Stationed at Shaw AFB
Moving to Maxwell Air Force Base? Explore These Area Communities
Quick and Easy Tips for Decorating Military Housing
Face Your Off-Season PCS Move with Confidence!