Fans of Fort Bliss often cite the predictable weather as one of the best qualities of the region. Yes, it’s hot for several months in this area of Texas, but the cooler months leave plenty of time for exploring outdoor adventures-- especially within nearby Franklin Mountains State Park.

On the northern edge of El Paso lies one of the best features of the region—Franklin Mountains State Park. It is the largest urban park in the U.S., reaching across nearly 40 square miles, which also happens to be entirely contained within the city limits of El Paso. 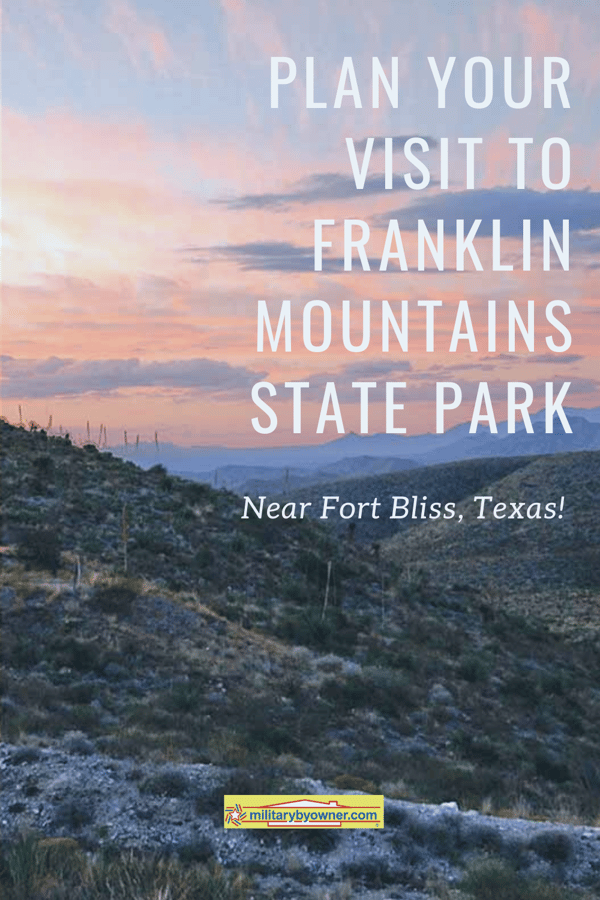 The Frank­lin Moun­tains over­look the Rio Grande and are the north­ern borders of the Paso del Norte (Pass of the North). Paso del Norte starts in Mexico, and the pass includes North Franklin Mountain, which rises to 7,192 feet in elevation. The Trans-Mountain Highway, which stretches across the park, sits at 5,120 feet above sea level.

All photos via Texas.gov

Hugely popular, the park is often at capacity and requires reservations for camping and day-use, especially during the busiest seasons of spring, summer, and fall. Here’s what to expect from the average weather and climate throughout the year.

Park enthusiasts come to enjoy over 100 miles of extensive hiking and mountain biking trails over the rugged desert terrain. According to AllTrails, these are the top 5 best trails in Franklin Mountains State Park.

You won’t be alone if rock climbing is your chosen outdoor adventure. There are two designated areas for rock climbing in McKelligon Canyon and Sneed’s Cory in the Tom Mays Unit.

A trip to the Franklins, as the mountain range is affectionately called, is not complete unless a night or two under the stars is on the agenda. In the Tom Mays Unit, there are 14 tent sites (without water or electricity) and five RV sites.

If you’re headed to the Franklins, note that there are four entrance points.

Wildlife and Plants Found in the Franklin Mountains State Park

A slower-paced visit to the Franklins should include birdwatching. Known to house over 100 species of birds that either visit or live in the park, the region draws birdwatchers from across the country. They’re hoping to spot golden eagles, ash-throated flycatchers, calliope hummingbirds, and pyrrhuloxia. Visitors are encouraged to check out the bird blind in the Tom Mays Unit to have a better view of the park’s birds.

Keep a close eye out for coyotes and mountain lions. Although difficult to catch a glimpse of, they do reside in the park along with a variety of small desert mammals and mule deer. Reptiles thrive in the desert.  Take care, as you’ll be walking through their favorite hangouts.

Hikes aren’t only for exercise; they provide the opportunity to see up close the wide variety of desert plant life found in the northern Chihuahuan Desert. Lechuguilla, sotol, ocotillo, multiple yuccas, and various cacti grow within the park’s borders. The Franklins are the only location that the Southwestern barrel cactus grows in Texas.

Historical Importance of the The Franklin Mountains

For about 12,000 years, Native Americans were the first to settle and cultivate the area, leaving clues to their history on white painted rocks, pictographs, and etched petroglyphs on boulders and rock walls. The thriving Pueblo population hunted for food, but also harvested edible and medicinal plants.

Spanish conquistadors made their way through this part of Texas in the late 1580s when colonization attempts of the Native Americans began. After the Spanish arrived, many others followed suit. The U.S.’s westward expansion increased the attraction of distant travelers in search of gold, trade, other forms of money, and exploration.

Just a 25-minute drive from Fort Bliss, the Franklin Moun­tains State Park provides plenty of opportunities to get out of the work-life grind. Hiking, picnicking, and historic sightseeing are easy adventures, but when stress relief calls for rugged activity, biking and rock climbing fit the bill. Camping is a family adventure accentuated by native wildlife sightings--just don’t forget to make reservations! The park is beloved by many in the region. Active conservation and protection procedures are planned and enforced to keep the park open for all who would like to visit.

Here are more ideas to explore the Fort Bliss area!

Headed to Fort Bliss? MilitaryByOwner advertises homes for sale and rent in El Paso and surrounding cities. We update the inventory regularly, so you’ll always have the best listings to browse.